With over 30 years of experience capturing over 1,040 complete plays, all during live audience, scheduled performances across the country, we have developed a wealth of time-tested, yet cost effective recording techniques. And it is because of this same level of experience, that we have become emotionally driven to capture as many of these productions as we can for individual regional theatre archives, before they end their runs, never to be seen again.

Our second goal has been to record these performances in the highest quality possible, capturing every minute detail in the costumes, set design, lighting and sound design, as well as every subtle nuance in the expressions and movement of the actors. We get only one shot at this, so it has to be done right!

For this reason, in the last 15 years we have been capturing many of these performances in the new High Definition, 1080p, 16X9 format, burning them onto Blu Ray discs, and donating large HD 1080p LED monitors and playback systems for our clients’ archival use.

The slow, smooth zooming capacity of our HD camera(s) allow us to gently push in when the blocking allows it, and pull out to follow the action. No more over exposed out-of-focus, VHS ‘quality’ from a tiny camera, locked off on a wide shot from the back of the house, or dangling from the mezzanine!

Richard Stucker is a highly respected and recognized Director / Videographer, specializing in capturing live performances and events all across the U.S. With his 30+ years of experience and his extensive, select list of highly skilled technicians and live event professionals, there is no project beyond his level of competence. 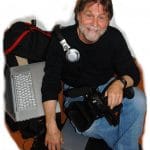 Have Gear Will Travel

Early in his 30+ year career, Richard Stucker worked for 4 major Video Production houses across the country, directing a wide range of productions from Live Corporate Events and Corporate Videos to a variety of Documentaries, and TV Commercials for major market ad agencies. Shortly before forming his own independent business, in 1978 he added recording live theatre, dance and opera performances to his specialties. With this extensive amount of national production work over the years, he has developed a tight network of highly skilled technicians, and audio and video professionals.

Director / DP and Editor of Corporate Videos around the world.

Richard has many references, including articles about his work in The Boston Globe, The Denver Post, American Cinematographer Magazine, The Village Voice, and the most recent article in Show Music Magazine, and he was named one of Studio Daily’s ‘Top 50 Creatives & Technologists’ in 2015.

From Oregon Shakespeare Festival, Bill Rauch, Artistic Director, “I cannot overstate my gratitude to you for how you’ve captured OSF’s work in my era. A huge number of our regional transfers have happened because of the quality of your work. And artists and scholars (and God willing, someday audiences) for decades to come, will have a vivid sense of our productions, all thanks to you. It’s a major, major contribution to my tenure as artistic director.”

From the Denver Post, ‘Video Director Stucker steals the scene in Denver, “Stucker is such a pro that he enjoys the adrenaline rush of filming a high-speed farce in the round…”

And the latest article from Show Music Magazine, ‘TOFTing the Full Monty – Just Like Live TV Again! “Stucker and the rest of this crew are among the best at what they do, and they work together so very well!  When they get it on tape, they get it right!”

*Note:  requires a 2 week advance booking, and a minimum of 2 production days.

For a list of personal references or copies of these articles, contact Richard at his email address:   Stucker@StuckerVideo.com.